If someone asked me to pick the most intensive and fruitful period of my life in terms of personal and academic development, I would without a moment of hesitation choose seven and a half months that I spent in Stockholm on a One-Year Jewish Studies Program at Paideia – the European Institute for Jewish Studies in Sweden. It was established in 2000 as a platform for cross-religious and cross-cultural dialogue with a goal to revive Jewish life and culture in Europe and to educate new, young community leaders. As a non-confessional institute it focuses mainly on studying Jewish texts using chevruta method- a deep analysis of the studied text in pairs, just like in yeshivot.

I heard about Paideia from my colleagues from the progressive Jewish community in Gdańsk, Beit Haim Dov (also known as Beit Trójmiasto). The alumni praised unique program, opportunities which Paideia opened for them and incomparable experiences as to social contacts. They also praised Paideia’s former director, Barbara Spectre, and her successor who became the new directior last year- Fania Oz-Salzberger.

Finally, in 2016, after having finished the first year of MA in Scandinavian Studies at the University of Gdańsk I decided to take up the challenge. After all I know Swedish, why not try to study in the country about which I’ve been studying for four years now? In the country which one doesn’t necessarily associate with Jewish studies because of its far reaching secularism. So I tried. And my life changed irrevocably. 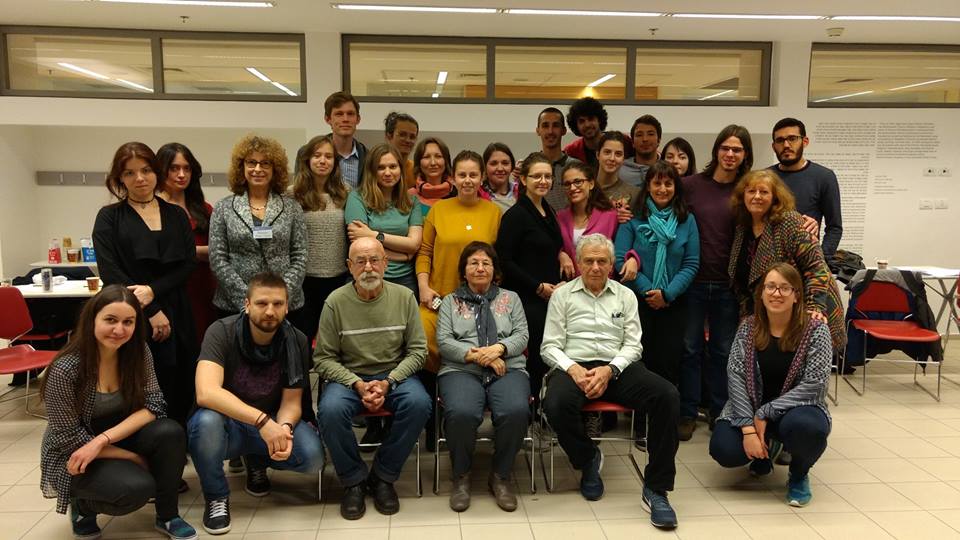 The program is really intensive. The courses last either two weeks or a week, the lecturers come from the best universities in Israel (Tel-Aviv, Beer-Sheva, Hebrew University), Europe and USA, depending on academic year. Every course is followed by an oral exam, written exam or a home exam- an essay. Our courses covered Jewish history, culture, philosophy, contemporary literature, rabbinic literature, Maimonides, Jewish-Muslim and Jewish-Christians relations, kaballah, literary interpretations of Biblical texts, secularism. Besides that, during the whole program we had lectures/seminars with Ute Steyer, the rabbi of the Jewish Community of Stockholm, as well as additional Talmud lessons and the weekly portion of Torah- parashat hashavua– with rabbi Eiran Davies residing in Stockholm. Of course an institute such as Paideia couldn’t make do without Hebrew lessons – those are taught on four levels of advancement by the dean of students, Frida Schatz.

Every student is obliged to conduct a project or write an academic paper. Classes that prepare and supervise the work process last for the whole year. One can really let his imagination run wild choosing a topic for the paper or project. For instance my paper was about Israeli LGBT cinema. 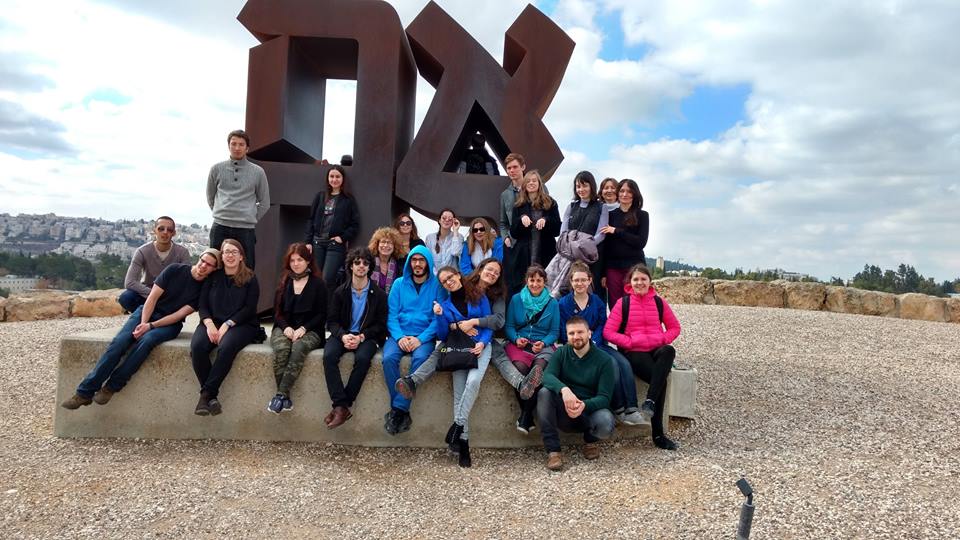 For a few years now Paideia has been in cooperation with Hochschule für Jüdische Studien in Heidelberg where I’m currently doing my masters in Jewish Civilizations. Paideia’s program finishes in March, semester in Heidelberg starts in April and finishes in September (although the lectures usually end in July). The following winter semester is dedicated to writing master thesis and can be done externally.

What would Jewish Studies be without a visit to Israel? The study trip to Israel is definitely the highlight of the studies. The duration of the trip and its extent vary depending on the academic year. We spent exactly two weeks in Israel, from December the 25th until January the 8th. We visited Masada, Jerusalem, Tel Aviv, Yerucham, Ein Avdat in the Negev Desert, we also passed by Jerycho. For a week we had a truly inspiring and very much varied thematically seminar at Yad Vashem institute thanks to, among others, Yoni Berrous. Those fourteen days cannot be compared to anything else, I’ll describe them closer on this blog in future. 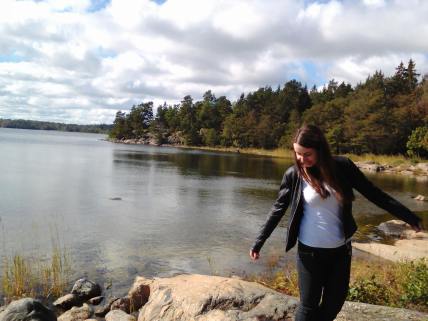 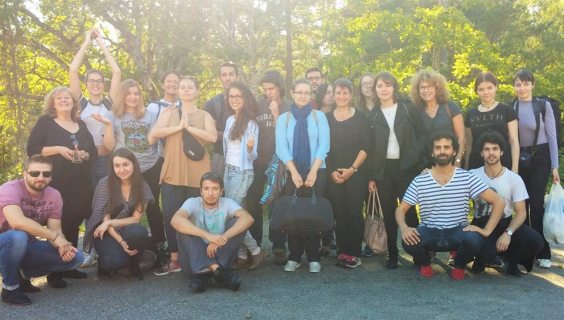 In the beginning of September, way before we flew to Israel we went for a couple of days to Glämsta, where we lived at a Jewish summer camp. We got to hear some ghost stories, we also had regular lectures, many icebreaker games and, in the evening- free time during which we would either play table tennis, sleep or go to the riverside and marvel at the beauty of Swedish nature (and I have to tell you that the sky in Glämsta around 2 o’clock is breathtakingly beautiful). That excursion let us become closer to each other. One of the students, a former opera singer gave us a lesson on voice modulation and various breathing techniques. Another student, very experienced in working in radio, made a presentation about public speeches. A colleague showed his culinary skills preparing a menu for our whole stay and supervising the making of the dishes by students appointed to do it each day. The last one wasn’t actually all that easy. I never had a shift in the kitchen, but once I went there in the morning because I wanted to help. My good intentions ended up in mixing frying pans destined for dairy and meat products and melting butter on the meat one… so we couldn’t omit koshering a frying pan. 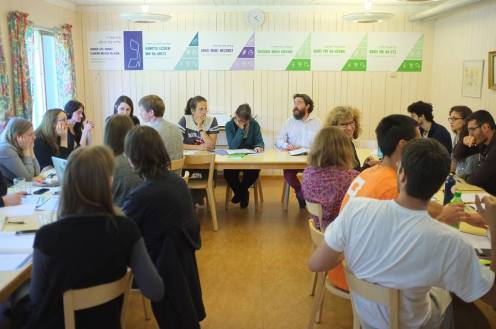 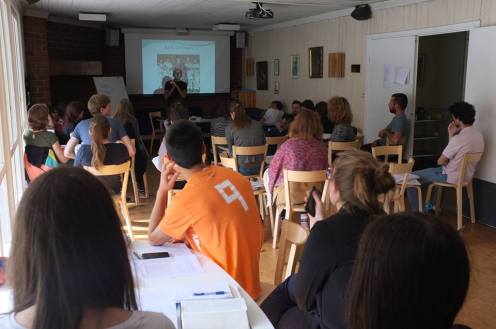 When I was still studying at the University of Gdańsk, I took part in organizing Scandinavian Studies Student Conference for two years in a row. Which is why I was so excited to be a volunteer in three conferences during my studies at Paideia: Stockholm Limmud, opening of Bajit building, the headquarter of Jewish community of Stockholm and opening of Paideia folkhögskola (where the main theme was home). Each of them was an irreplaceable chance to train language skills (in my case mostly Swedish), social skills, reflex and struggle with physical and mental exhaustion. The reward, except for experience was making friends with other volunteers and working with such stars as Aaron Flam whose fireguard I was during one of his shows.

A thing which one probably appreciates only after some time is the possibility to make unique contacts. Paideia Staff worked hard on filling all the gaps in our already tight schedule, especially in terms of guests during the first few weeks of studies. We were visited by, among others Israeli ambassador in Sweden, Isaac Bachman, a former chief editor of the invaluable Polish magazine about Yiddish culture Cwiszn, Karolina Szymaniak, rabbi Chaim Greisman from Stockholm Chabad and the chief editor for Judiska Krönika, Anneli Rådestad.

After a while you’ll catch yourself on some déjà vu feeling whenever you search through some websites about Jewish studies and organizations in the world. “Hmmm, this face looks familiar…” In most cases it will be a Paideia guest whose name you might have forgotten because there were so many guests, so many faces. Also after having finished your studies you will still have a chance to make interesting friends. Paideia organizes Alumni Conference every year, every time somewhere else, always on Thursday, Friday, Saturday and Sunday in June. This year the conference took place in Berlin, last year it was Warsaw, in previous years also Venice and Toledo. Except for alumni and Paideia staff, the invitees include special guest with cooperating institutions and universities.

Speaking of networking I have to mention the thing that I loved the most about Paideia. The students come from different European countries, sometimes also from the US (I had two colleagues from the States) or Israel. They are in different age, from late teenage to adult, they come from totally different cultural, ideological and educational backgrounds, they have completely different experiences and skills. To become a Paideia student one doesn’t have to be Jewish. The institute accepts everyone regardless of confession, gender, age or nationality. In my group there were Catholics, Orthodox Christians, atheists and even a Baptist pastor. In the previous years there were also Muslims. I immensely miss the mornings just before the lessons started when we, still sleepy, would gather in our kitchen to prepare first coffee or tea and speak in English, German, Russian, Polish, Spanish, Serbian, Ukrainian, Hebrew, Romanian, Swedish, Slovak. In terms of learning languages, becoming familiar with their melodies and breaking the speech barrier it was definitely the most fruitful period for me. 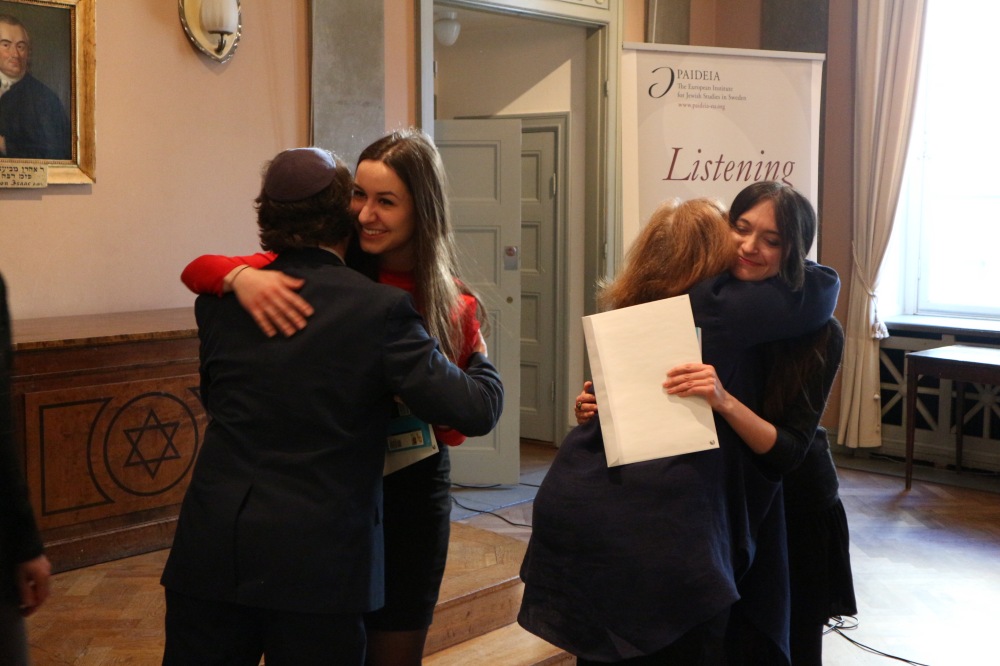 Very briefly: for me Paideia was a real school of life. It opened me to people, helped in overcoming my inner barriers and was a real educational challenge since the language of instruction is English, which, in majority of cases wasn’t our lecturers’ first language. It made possible meeting people whom I’ll never forget and with whom I’ve made very tight, deep bonds. It sounds banal but so say other Paideia alumni: it really changes your life. What I described here, is just a tiny part of all my experiences.

If you are interested in the recruitment process, Jewish life in Stockholm, details about the trip to Israel, ECTS points or everyday student life in the capital of Sweden, feel free to contact me.

One thought on “Paideia- Jewish Studies in a nutshell”

This blog is written and edited by all members of the Jewish Studies Research Group at Gdansk University in Gdansk, Poland. Established only in April 2017, our Jewish Studies Research Group is a new addition to already diverse research projects and divisions at Gdansk University. We hope to communicate our interests and current activities within an informal, lively, and concise formula of a blog. Danciger Bleter's name vaguely references a variety of small publications in Yiddish in the interwar period.
Loading Comments...
%d bloggers like this: